In the Future Life Progression Course we will explore future lives as well as future events in the current life.

Carlos Realigns With His True Self

I asked the students in my self hypnosis class to work on a goal or solve a problem during class. Carlos, one of my early students, was questioning whether or not he should complete his Ph.D. in 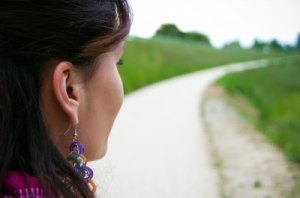 Biology. He wondered if he could integrate being silly and enjoying life with being a serious scientist. He did not believe that he could.

During class, I progressed the students to a time in their future when they had resolved their current dilemma. Carlos saw himself back in Puerto Rico with his cousins and parents. He was laughing and enjoying himself. This scene helped him to get in touch with what had been missing in the four years that he had been studying in the United States–his ability to laugh and enjoy life! For the rest of class, Carlos laughed, cut up and acted silly. Even though I had met Carlos several months before he attended my class, I had never before seen this side of him. Now, when he smiled, his whole face lit up. He looked like a different person. In his effort to be the serious scientist, not too many of his fellow students and professors had seen this delightfully humorous side.

After seeing himself in that future scene, Carlos wrote a suggestion for himself about bringing laughter back into his life. He made a commitment to himself to take the time to read the comics in the newspaper every day and to watch several half-hour sitcoms every week.

Afterward, whenever I saw Carlos he would smile. It was always as if an inner light had been turned on. We all would have missed a delightful piece of this young man’s personality if his subconscious hadn’t shown him the missing element in his life bringing him in line with his True Self.

Linda Learns to be Assertive

Progressing clients into future scenes is very empowering. As we see and feel ourselves being successful, we more easily access those states.

One of my private clients, fifteen-year-old Linda, had problems standing up for herself. I directed her to go to a scene in her future when she had learned this important life skill. She “saw” herself at age eighteen, owning her own power and no longer letting people walk all over her. Now that she has rehearsed the behavior that she desires, her subconscious will start to bring that into her current life. It was empowering for Linda to experience this new way of relating to people.

Excerpt from Finding Your True Self (out of print)

Your cart is empty