Betty, a hypnotherapist in Vermont, describes her personal transformation with this past life story. 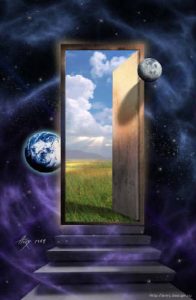 “A few years ago I was doing some deep personal healing work and found myself in some pain I couldn’t understand. It seemed as if I were grieving for someone young and innocent who had been badly victimized, but the feelings didn’t seem to attach themselves to anything in my own personal biography. This led to my first experiences with past life regression, and the result for me was a profound personal transformation.

“In my hypnotic regression experience, I found myself in Ireland in the year 1620 as Anna, an Irish peasant girl who was about twelve years old at the time. Anna loved her simple life close to nature and she sang as she did the farm chores. She also loved to go to the village church and was in awe of the great stories told in the sculptures and sacred images. I remember the tears that came as I realized that Anna was intelligent and longed to learn to read, but as a poor peasant girl, she had no access to education. She wanted to become a nun, probably the only hope a peasant girl would have had of broadening her horizons. But she never got to pursue her dream. While only twelve, Anna was sent away to be a servant in a fine house.

“I remembered the back-breaking work of scrubbing floors in an environment where the language was not my own. Only later did I learn that 1620 would have been during the British “plantation” of Ireland, a time when the English literally colonized the country, taking land away from the peasants. Apparently, Anna was sent to serve in a British household. Most poignantly, there was a library in the house full of books, but Anna was forbidden to touch them. I felt in my body the longing of looking in through the library door, watching the master of the house writing at the desk, knowing I was forbidden even to speak to him, much less look at the books or learn to read and write.

“I did several regressions to Anna’s lifetime. In one, the other servants were viciously shaming her. It seemed that they had found out about her desire to learn to read and write, and they were merciless. “Who do you think you are? What makes you think that you could ever do such a thing? You don’t have the right! How dare you think you’re worthy? Who are you to imagine doing that?” Anna was given the hardest work and it seemed that no one was kind to her. She died alone at the age of fifteen, curled up in a bed in the servants’ cold quarters.

“This seems to be such a small, unimportant and insignificant lifetime. And yet the impact it had upon me was enormous. First of all, I understood so many things about myself and gained a whole new appreciation for my current life. In this lifetime, I am surrounded by books and I read in three languages. Books are my most treasured possessions. I can by-pass clothes, shoes and so forth, but I’m always buying books. No wonder my love of reading and learning is so strong–I am healing Anna’s lifetime in this one. I also realized that our past lives are closer to the surface than we think. Years before, I had watched Disney’s Beauty and the Beast and found myself moved to tears by the scene in which the Beast gives Beauty a whole library as a gift. “All these books are mine?” she exclaims, as she dances and whirls around joyfully. My heart was aching and I felt that a library of books was the most beautiful present anyone could receive. Now I know that the “Anna” part of me was responding to that scene.

“So much now made sense. When I had lived in Europe as a student, I always felt at home in the medieval cathedrals, monasteries and convents and wondered if I had been a monk or a nun in a past life. Now I see how much a past-life part of me was fulfilled just by visiting these reminders of the monastic life that Anna had longed for. I also understood why I have such a great love of Celtic art and music. I’ve always found that songs sung in Irish Gaelic are immensely comforting to me, as if the syllables and sounds of that language speak to my deep soul even though I don’t understand their meaning.

“However, the most remarkable effect of the Anna lifetime has been a profound healing of my own self-worth and the release of major personal blockages in my life. It’s as if I had carried within me the deep unworthiness of being a servant and suffering humiliation for my intelligence and aspirations to fulfill my potential. No one in my own childhood had ever humiliated me harshly with such words as, “Who do you think you are?” Yet in my own life, whenever I tried to do certain things, vicious inner voices would hold me back with just those kinds of thoughts. The two blocked aspects of my life were my artistic creativity and my desire to do healing work. I was absolutely blocked from expressing these aspects publicly. Just thinking about showing art or training for healing work was devastating to me, for the inner shame was intense. “How dare you think you have anything worth showing? Who would want to see your art? What makes you think you could ever do healing work? Who are you to imagine such things?” It was as if I had a vicious inner critic who would defeat me before I could even begin. I longed to develop my art and to do healing work, but I could not tolerate the severe feelings of unworthiness and shame.

:My regressions had included much attention to healing. There were dialogues between Anna and my present-day self to bring her the truth of her worth. I appreciated her for giving me my hunger for learning and self-development, and I reassured her that I was healing her wounds in my present lifetime. Light and love were brought into the cold, lonely room in which she died.

“The result was that the critical inner voices disappeared entirely! Soon after the regression work, I found that I could paint and show my art to others. I also proceeded with trainings (among them hypnotherapy) and began to practice as a healer. Ever since the regression work, I have been absolutely free of the old, crippling feelings of shame and unworthiness, and I no longer experience the vicious humiliating voices within myself! What a gift this is to me.

“I opened my hypnotherapy practice two years ago in an office where I had painted a wall-to-ceiling mural. The mural is a soothing scene of deer and a blue heron, moonlight over water, mountains in the distance and a star-studded sky. For me to practice healing work in a space where my own artwork creates a soothing environment is such a transformative healing of my personal blockages, it truly is a miracle.

“It is not important to me whether Anna is historically “real.” I could never verify if this story is truly a past life or if Anna really lived at all. What I know is that she has been alive inside me, deep in my subconscious memory banks, and that retrieving her story and bringing healing to her has given me profound and lasting benefits in my current life. Regression work allows us to heal the past through the present and heal the present through the past. Love and healing defy time and space, as everything is used for learning and for healing.

“Betty’s story makes several excellent points about past life therapy. First, people often believe that everyone has past lives as kings and queens. In all the years that I have guided past life regressions, almost everyone has experienced lifetimes in which they were down-to-earth, hard-working people. And second, whether this was an actual life or simply a metaphor created in Betty’s imagination, it has healed her life and connected her more fully to her True Self.”

Excerpt from Finding Your True Self (out of print)

Your cart is empty